You can’t buy class, but you can steal it, it turns out. At the expense of potentially fetishizing degenerates, drug dealers and dictators, I’ve compiled some examples of cool living spaces, which were once occupied by some of the most notorious criminals. Now, before we begin it is worth noting that most, or even all of the below images are recreations of the cool living spaces which were once occupied by evil. Unfortunately most places don’t get left in pristine condition for decades and decades so some idiot like myself can write a period accurate blog about the furnishings, so inconsiderate… These rooms still look awesome none the less and would hopefully inspire your own living space…The: ‘Hey cool chair’ … You: ‘Thanks Al Capone had one just like this’ … Them: ‘Errm, I’m gonna go…”. 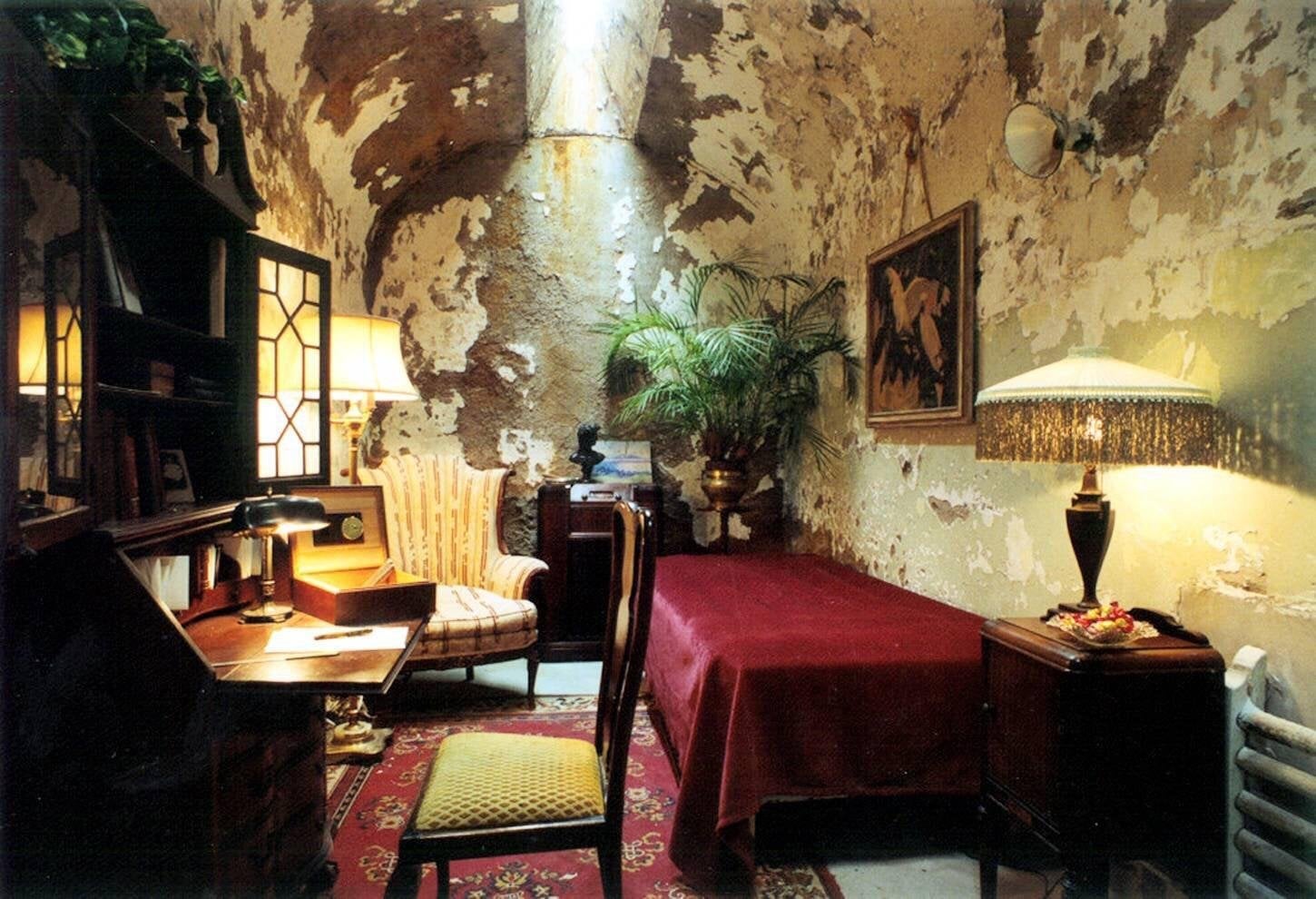 Alphonse “Scarface” Capone, notorious 1930’s gangster and the man who popularized the gangster trope of pinstripes and Tommy guns. In 1931, Al Capone was tried and convicted of….not paying taxes. Yep, the mass murdering bootlegging gangster was brought down by not filing his tax returns. The judge on the case cleverly swapped out the jury at the last minute to include a group of people who weren’t paid off by Al Capone, and who were hardcore prohibitionists. The above is a recreation of his cell at the Eastern State Penitentiary, where he stayed before being moved to Alcatraz. We really loved what he’s done with the wall here… ha ha… but seriously, this may not be the most accurate display of what his cell actually looked like according to some Googling.  But it was certain that Al Capone lived in luxury in the prison, with similar furniture, compared to the other prisoners. One inaccuracy was that Al Capone actually had a cellmate during his time at Eastern State Penitentiary. This article shows a more accurate representation.

Despite this, the above cell still looks damn cool, we’re loving the cool analogous color scheme of red and yellow. Don’t know what I’m talking about? Check out our color guide.

When Shakespeare wrote about two star-crossed lovers, he probably didn’t have a Bonnie and Clyde due in mind. Known for robbing people blind and shooting up police  during a great depression in the economy, Bonnie and Clyde really proved how pop culture’s obsession with murderers and romcoms transcends the individual degenerates which commit these crimes.

The above room is from their Missouri hideout in Joplin, you can even rent it….Euuugh, now that is the fetishizing of criminals. During a shootout at the property, two officers were killed by the murderous lovers, and Clyde’s brother who was staying with them.

Bonnie and Clyde’s rampage and lives ended in 1934 when a posse of police men (when did we stop using the word posse in modern culture?) ambushed the pair on the highway, riddling their car and their bodies with lead. Presumably the car is still on display in some casino.

We’re not entirely sure how period accurate this above living space is but the red and blue chair contrast each other nicely against the unsaturated yellow wall, an interesting idea to take for yourself, based on a triadic color scheme. 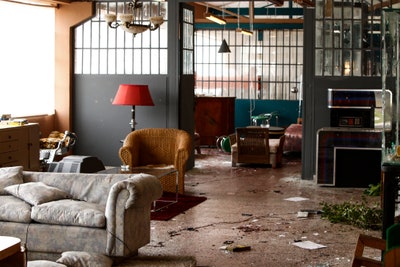 Okay, so the above photo is actually from the popular Netflix series Narcos (well worth a watch by the way!), it is a recreation of Columbian drug lord Pablo Escobar’ prison. If you’re unfamiliar with the prison nicknamed ‘La Catedral’, you may be wondering why it looks so nice, well that’s because Pablo generously volunteered to build the prison himself…and staff it with his own men. It was a stroke of genius, as not only did it protect him from other cartel attacks, but it also protected him from the police, and the Columbian army.

We’re liking that red lamp/yellow chair combination, notice how your eyes are also drawn to that blue wall in the background? Notice how that blue wall works well with the red lamp and yellow chair? That is because of the principal of the color wheel, as mentioned in the previous section, it is a triadic color scheme a nice and striking contrast to the surrounding neutral walls.

Above, Pablo Escobar’s formerly luxury villa on the coast of Tulum, Mexico, which is now a 5-star hotel. Crime doesn’t pay remember. Okay okay, this one clearly looked different in Pablo’s time, and has since been redecorated, by some arty farty New Yorker no less, but I’ve included it none the less since it looks cool, hey, arty farty New Yorkers know what they’re doing. The red rug and black and white couches are a bold look that works really well…